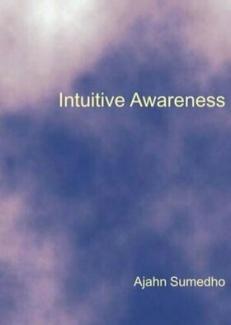 Over the past few decades, Ajahn Sumedho has said much about "intuitive awareness." Most often the Pāli word sampajañña is translated as "clear comprehension," but Ajahn Sumedho prefers to foreground the notion of "intuitive awareness" as a way to extend and elaborate how we understand this important meditation concept. He feels the phrase "clear comprehension" is "rather vague" and that "it doesn't give a sense of the broadness of that clarity" (15). In his view, "sampajañña includes fogginess, includes confusion; it includes uncertainty and insecurity. It’s a clear comprehension or the apperception of confusion – recognizing it’s like this" (16).

In his forward to a book titled Intuitive Awareness — a compilation of Dhamma talks given by Ajahn Sumedho — Ajahn Amaro provides some helpful context for understanding the place of "intuitive awareness" within the broader concept of "right mindfulness" (9):

"The quality of sati-sampajañña/intuitive awareness is used to refer to part of a continuum which begins with sati, the raw mindful cognizance of an object; the second element being sati-sampajañña, referring to the mindful, intuitive awareness of an object within its context; the final element is 'satipaññā' – usually translated as 'mindfulness-and-wisdom' – which refers to the appreciation of an object in respect to its essential nature as transitory, unsatisfactory and not-self."

While other Theravada monks — such as Nyanaponika Thera, who coined the phrase "bare attention" — focus on the initial element of Right Mindfulness, Ajahn Sumedho draws attention to the second element.

Other popular Buddhist meditation techniques, such as loving-kindness meditation, highlight the positive, but "intuitive awareness" makes space for all experience. Ajahn Sumedho says (20):

"You teach mettā and they’re delighted, because with mettā you are not being critical about anything.... Mettā is very hard to come to terms with on a conceptual level. To love your enemies, to love people you hate or can't stand, is an impossible dilemma on the conceptual level. But in terms of sati-sampajañña, it involves acceptance – because it's about including everything you like and dislike."

With its emphasis on the positive, the practice of mettā can awaken and delight the mind on a gloomy day. But we can find equally beneficial results when we include all feelings and emotions. Naturally, it's up to each of us to find out what brings about positive change in our thoughts, speech, and action. We each must negotiate a middle ground between indulging in all sense pleasures and denying ourself any enjoyment in life.

There's a lot to say about this seemingly simple practice of "intuitive awareness," but one more point seems worth mentioning here: this technique can be used well beyond the meditation cushion. We can use this practice and trust in mindfulness while engaging in other activities such as yoga, tai chi, and qigong. As Ajahn Sumedho, who has talked having a Hatha yoga practice, explains (18):

"As many of you know, you can damage the body quite badly through tyrannically forcing it to do something. Yet mindfulness and clear comprehension, sati-sampajañña, includes the body and its limitations; its disabilities and its sicknesses as well as its health and pleasures."

Thus, many activities are suitable for cultivating intuitive awareness. The practice is available to anyone. And it offers countless benefits by encouraging you to look directly into the realities of your life without getting paralyzed by analysis.

Earlier this week I led a guided meditation on intuitive awareness for Spirit of the Lake so you can explore this topic more right now if you would like: