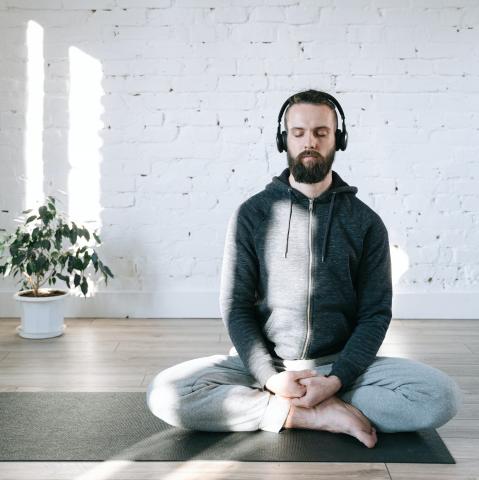 Most people who try meditation probably think of it as an activity done in silence. They might learn the common meditation technique where they observe sounds that happen to arise and notice the temporary nature of those sounds, but they probably would not expect those sounds to continue throughout their meditation. In other words, sound is understood to be a departure from the "real work" of sitting — or struggling to sit — peacefully in silence. Fortunately, there is more than one way to meditate and there isn't some rule that the only allowable "meditation music" is repetitions of John Cage's 4' 33" (the famous piece that consists of four minutes thirty-three seconds of silence).

For instance, (audible) music could be used during meditation to help relieve tension. Since Tony Scott’s 1964 album Music for Zen Meditation, generally viewed as the first "new age" recording, a lot of musicians have created music that seems especially suited for meditation. In addition to the plethora of music available on the web specifically labeled "meditation music," you might think of the "ambient music" of Enya or of Brian Eno. Music of this ilk often gets labeled "soothing" or "relaxing." As the music critic Robert Christgau put it in 1979, these ambient musical works "have real charms as general-purpose calmatives."

Alternatively, we can use music to practice listening without reacting or judging. Yongey Mingyur Rinpoche, the Tibetan monk and best-selling author, has explained how to listen mindfully to classical music: "How do you practice listening meditation? Just listen to sound. If you know that you are listening to sound, that is meditation." In this form of meditation, the focus isn't so much on the sounds but on your body experiencing the sounds and the emotions that arise as a result of listening. It's a significant departure from having music on in the background or listening to music with the intent of offering an opinion about the music. It's comparable to cultivating a non-judgmental awareness of your body while doing yoga poses.

Music of any kind could prove beneficial during seated meditation. It might not even be music in the traditional sense. My favorite kind of meditation "music" is the sound of the wind chimes outside my window on a windy day. There is supposedly an old Zen proverb that asserts, "the music is not in the notes, but in the silence between," and one teacher taught his student piano by playing a single note and listening to the note dissolve into nothing. I explored this technique in a recent Pretty Good Meditation episode that I called "Noticing Space."

While many musically-oriented meditative practices focus on listening — such as the practice of "Deep Listening" developed by the composer Pauline Oliveros — music meditation can also be a practice in which you are creating the music. In yoga communities, the most visible examples of this are chanting and Kirtan. Yogis frequently describe Kirtan not just as a musical practice but as meditation. Psychology Today even published an article with the title: "Kirtan: The Easy Meditation That Can Improve Your Brain." I have found the repetitive nature of singing mantras or chanting to be an especially calming experience when I can let go of my views and opinions about my singing or playing.

The practices of meditation (seated), yoga (postures), and music can all support each other in the search for peace, happiness, and wellness. We each have the opportunity to explore different practices and discover what works. For Swami Kripalu, the namesake of the Kripalu Center for Yoga & Health, "Music and dance are so integral to yoga that without them yoga is incomplete. I dance and sing constantly in my meditation room. This isn't simply art, but a form of meditation."

If any of these musical practices have piqued your interest, and you live in the Twin Cities area, we will be exploring and practicing some of these techniques in my Mindfulness through Music workshop at Spirit of the Lake this Saturday (Dec. 4), 1-2:30pm.