Letting Go of Performance and Learning to Observe 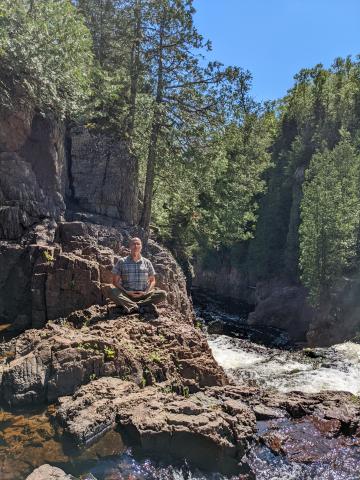 Last weekend I attended a 4-day retreat put on by a nonprofit organization called onelove.yoga. The title of the retreat was: "Moments of Silence Yoga and Meditation Retreat to Grand Marais." As is often the case for me with meditation retreats, I left feeling nourished. Even better, I had a breakthrough. I realized why this weekend led to feelings of relaxation, renewal, and joy.

The breakthrough happened near the end of the retreat in a meditation led by Nancee. Part of what she said was something I had heard (and said) many times before: yoga and meditation provide opportunities for observation. She was talking about an idea that is difficult to grasp: we are not our thoughts. Psychologists call this concept "decentering." Outside of meditation circles people don't usually talk about "observing" thoughts. We get lost in thoughts. We believe what we think.

But Nancee added a word that resonated with me: she said we can practice observation rather than performance. She said we spend most of our lives performing. She's right.

The retreat felt different. I let go of performance and practiced observation. Without Internet or WiFi, there was no planning or preparation for my various "performances" (at work, home, etc.). Instead, I woke up in the morning and stared at Lake Superior. I observed the color of the flowers and the activity of the birds. I watched trees blowing in the wind and other aspects of nature. I noticed my physical reactions to those stimuli. 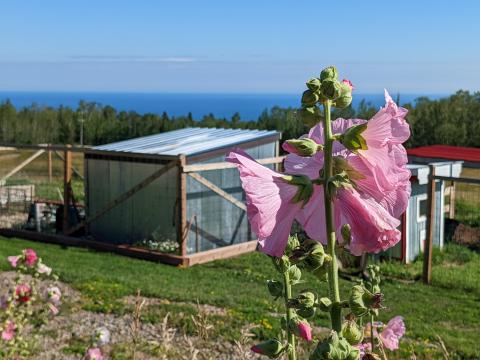 I was often the first person awake (or at least outside) in the mornings. I practiced lots of Kasina meditation that I learned from Ajahn Sona. In Kasina meditation, wind, water, earth, and fire, as well as the primary colors in nature, are used to find stillness and clarity. I experienced some intense, peaceful meditative moments those mornings. It was observation without performance.

Many of the group activities on the retreat also promoted observation, including:

None of those activities required talking. I found peace during those moments of silence with other people.

The practice of cold dipping taught me a lot.

Before this retreat, I had tried "swimming" in Lake Superior many times. It's a cold lake. The temperature ranges from 32 to 55°F. My previous attempts at "swimming" usually went like this: I put my feet in the water. I think "OMG, this is SOOOOOO COLD." I "tough it out" for a few seconds. I run back to the shore wondering what I was thinking, yet mildly proud of myself for trying. I was performing the role of "guy who is crazy enough to go in Lake Superior." I didn't observe reality.

The onelove.yoga retreat offered a contrasting experience. A group of us drove down to the lake early each morning. In silence the whole time, we went into the water for as long as felt useful. Then we sat in quiet meditation, or with our eyes open taking in the beauty of the lake.

The first morning went mostly like my previous attempts. The water was maybe up to my knees. Then I turned around and quickly headed back to shore. Brrrrr!

The second morning I took a different approach. I let go of my thoughts about the experience. The lake felt cold, but I realized it wasn't causing any pain. It actually felt good. So I sat for maybe 10-20 seconds with water up to my shoulders.

By the third morning, I let go of more fear. I submerged my whole body under water, including my head, multiple times. I stayed in the water for at least a few minutes. No performance. Just a transformative experience observing my body.

I didn't leave the lake transformed into a meditation master, fully in control. After dipping my whole body into the Great Lake the performer came right back. I got to shore and took a selfie to commemorate the experience. Our "pics or it didn't happen" culture must still have a strong hold on me.

Science suggests that cold exposure can enhance both mental and physical health. I'm not sure if my cold dipping produced any physical benefits. It definitely affected my perspective. My life as a "performer" continues. So do my practices to cultivate observation. 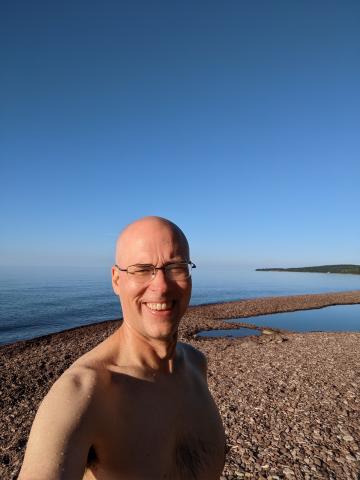 Overall, the retreat was wonderful. Holly and Nancee offered skillful guidance. They provided safe containers for self-exploration without judgment. Many other people supported us on the retreat. The home-cooked vegetarian food tasted delicious. I made new friends.

You will be hearing a lot more about onelove.yoga because I joined their board earlier this month. For now, I will continue to investigate the role of performance in my life and create more opportunities for observation.

Thanks for being you!

Such kind words, thank you Matthew.