More Than a Mere Yoga Teacher 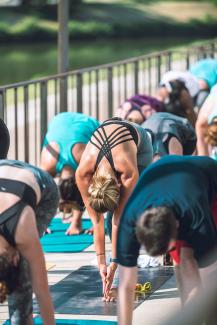 This topic is on my mind because I recently completed Yoga Teacher Training (YTT) at my local yoga studio, Spirit of the Lake in Excelsior, Minnesota.

While I was in YTT, most of the people who asked me about it assumed that the program only focused on learning and teaching yoga postures. While we did spend time learning yoga poses each month, the primary topic for each month varied greatly:

Thus, graduating from this teacher training required knowledge not merely of postures, but also topics such as philosophy, meditation, and anatomy.

Many yoga teachers today seem especially focused on the business of yoga. The sexually abusive yoga guru has been replaced by the neoliberal yogi. Yoga podcasts have names such as "The Connected Yoga Teacher." The Yoga Teacher Resource Podcast offers advice for how to "make a bigger impact." For many of these people trying to make a living as a yogi, being a yoga teacher nowadays requires not merely an understanding of Patanjali's "Eight Limbs," but also strategies for marketing, social media, and building a brand.

The business focus was understandable, but unexpected. For comparison, nearly everything I have learned about Buddhist meditation was from teachings that were freely given. For example, there are no advertisements on the Amaravati podcast, all of the books on the Amaravati website are offered under a Creative Commons license, and there was no charge when I attended a meditation retreat at Amaravati — made possible because of the generosity of past retreatants. Likewise, my local meditation center offers all of its programs "free of charge in the spirit of generosity." So for me, at least, the commercialization of yoga feels totally at odds with the predominantly nonprofit world of Buddhist meditation — even though both practices evolved out of the same spiritual traditions.

To be clear, the business of yoga was a very small part of my teacher training. When we were learning about human anatomy, the practices of Ayurveda, or how to use props while teaching restorative yoga, we were not talking about commerce or business plans. Indeed, from what I could tell, many of the 10 other students in my teacher training class (all women) expressed little interest in using what they were learning in YTT to generate an income.

During YTT I especially enjoyed studying classic yoga texts, such as the Upanishads, the Bhagavad Gita, and the Yoga Sūtras of Patañjali. Consequently, one of the most pleasant surprises I have encountered since I graduated and registered with the Yoga Alliance has been the continuing education programs offered by the Yoga Alliance. I've been able to dig even deeper into the Bhagavad Gita, yoga philosophy, and the origins of yoga.

The purpose for yoga, according to Patanjali, is the "complete mastery over the modifications of the mind" (yogaha chitta vritti nirodaha). Yoga, in that sense, is a discipline that requires us to work primarily with the mind (chitta), and each of these other practices should only be employed in support of the goal. Absorbing a collection of facts about the mechanics of yoga postures or the anatomy of the human body will improve one's yoga practice only if those facts lead to the stilling of the mind. Accordingly, people such as Shyam Ranganathan suggest that yoga teachers invert the importance of asana (postures) and treat them as of derivative importance.

I benefited greatly from yoga teacher training, and I feel motivated to continue along this path, examining causes and conditions, finding beneficial practices, exploring the postures, and now, teaching.