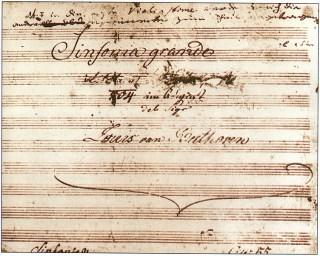 Over the weekend, I was sitting in my office watching an episode about Beethoven's 3rd ("Eroica") symphony from the excellent PBS series Keeping Score, when Michael Tilson Thomas said something about the symphony that intrigued me. I could not easily locate my copy of the orchestral score, so rather than continue my search in another room, I did something that I find myself doing more and more these days -- searching on the International Music Score Library Project (IMSLP) website. As often happens on IMSLP, which is also known as the Petrucci Library, I found exactly what I wanted.

Don't get me wrong. The Keeping Score project is excellent. The site has some fancy tools for exploring excerpts from the score of the Eroica, complete with audio and visual guides. It's quite impressive.

But if you want to listen to a complete recording of the Eroica and follow along with a score, IMSLP has all that you need. Not only does IMSLP have a score of the Eroica, it has seven different versions of the full score (from as early as 1809), as well as various parts, arrangements, and transcriptions. It also has a number of recordings, not from Leonard Bernstein conducting the New York Philharmonic, but from the Czech National Symphony Orchestra.

The scores and recordings on IMSLP are free and legal. This Wikipedia-inspired site allows users to upload public domain scores, which can be freely distributed. While copyright laws differ from country to country, in the United States works published before 1923 are public domain. In other words, IMSLP hosts more than 100,000 scores by composers such as Bach, Beethoven, and Brahms, rather than copyrighted works by contemporary composers. If you are looking for more information about the legality of this project, the New York Times published a helpful article that explains more.

I can think of at least five different uses for IMSLP that might not be readily apparent:

In the final decades of the 20th century, music scholars grew increasingly incredulous toward grand narratives that featured "great works by great men." With the advent of the Web -- and tools such as IMSLP -- the work of disrupting these grand narratives can be opened up to those without the academic credentials of a music scholar. Access to online music libraries, journals, books, and other information is increasing. While it was possible in the past, websites such as IMSLP make it a lot easier and invite everyone to participate.

If you do happen to find something interesting on IMSLP, and you create a free blog on a site such as Drupal Gardens or Wordpress, IMSLP wants to know about it and might even feature it on their website.