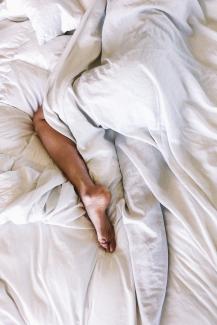 The CDC, American Academy of Sleep Medicine, Sleep Research Society, and many other sleep experts agree that adults need seven or more hours of sleep per night. Children need even more sleep. Further, sleep experts advise that a lack of sleep can lead to a wide variety of negative consequences. One "Consensus Statement" from representatives of these organizations warns:

"Sleeping less than 7 hours per night on a regular basis is associated with adverse health outcomes, including weight gain and obesity, diabetes, hypertension, heart disease and stroke, depression, and increased risk of death."

In other words, not getting enough sleep can create some serious problems, and statements like "I'll sleep when I'm dead" are at least misguided, if not dangerous.

The Science of Yoga and Sleep

The good news is that yoga can help improve your sleep. A large and growing body of evidence confirms that physical exercise, breath work, and meditation all individually improve sleep, so it should come as no surprise that putting these activities together in a yoga practice leads to a wide variety of benefits.

Sleep drugs only treat symptoms and often are accompanied by lengthy warnings or a general lack of research about long-term effects. Yoga as a "behavioral strategy," in comparison, has no negative side effects and addresses the underlying causes of poor sleep, such as anxiety, stress, etc. While such a claim may sound suspicious, it also happens to be backed by extensive scientific evidence.

Experienced yoga practitioners know that yoga can deactivate the stress system and create calm. This naturally leads to better sleep, and when one survey of yoga practitioners asked them to respond to the statement "my sleep is better because of yoga," 68.5% of the respondents either agreed or strongly agreed.

More than just opinions, these positive changes have been observed in a wide variety of individuals. For instance, one study that examined the sleep quality of long-term yoga practitioners found that "long-term yoga practice is associated with significant psycho-biological differences, including better sleep quality." Another study concluded that yoga reduces sleep disturbances for depressed pregnant women, and yet another found yoga could help treat people with insomnia.

Fortunately, it's never too late to start practicing yoga in order to improve your sleep. A study of 120 elderly residents divided people into three groups (yoga, ayurveda, and no intervention) and the group that started practicing yoga showed a significant decrease in the time taken to fall asleep and an increase in the total number of hours slept.

A systematic review of the available research in this area concluded that the kind of meditative movement we do in yoga has "beneficial effects for various populations on a range of sleep measures." Additionally, the evidence clearly indicates that the more you practice yoga, the better you sleep.

The research in this area is vast, and I've only included a few of the available well-designed studies. The Yoga Alliance maintains a curated list of quality scientific research on yoga that includes more studies of yoga and sleep. Last year the Yoga Alliance produced two 1-hour workshops about yoga and sleep (part 1 and part 2) that cover the research in this area much more thoroughly.

While the scientific studies offer compelling evidence that yoga improves sleep, they do not suggest that yoga always benefits sleep for everyone. Luckily, we can find out if these claims match up with our lived experiences.

Earlier this year I decided to try adding more yoga to my daily schedule and observe the results. For the past decade or so, I have mostly practiced yoga in the morning and I wanted to see what would happen if I added yoga before bed. For me, the beneficial results appeared almost immediately. I did not conduct a scientific study to confirm my results, but it has felt like I sleep better and wake up less during the night.

The Sleep Foundation recommends doing poses such as standing forward folds (uttanasana), reclined butterfly (supta baddha konasana), legs up the wall (viparita karani), and corpse pose (savasana) before bed. I agree with their recommendations, and I have found many other yoga poses to be beneficial, such as child's pose (balasana), lizard pose (utthan pristhasana), sphinx pose (salamba bhujangasana). Generally speaking, I have found that the easier the pose the better, but also that I want to do more than just lie in savasana.

One of the biggest challenges I have encountered with a bedtime yoga routine is simply getting "on the mat." On the nights when I feel like I just want to go to bed I don't force this routine on myself. But most of the time, if I sense some hesitation, I default to doing yoga just before bed. Often, I find benefit just in exploring my mental resistance to doing yoga before bed, especially because I can rarely think of a more beneficial activity at that time of the night.

Because I've benefited from incorporating a bedtime yoga routine, I decided to try an experiment. I invite you to join me for a new online Bedtime Yoga class that I will be offering through Spirit of the Lake. I don't know of any other yoga class like this, so I have no idea if people will find this useful. I'm going to try this 30-minute class as an experiment on Tuesdays and Thursdays during the month of October. No props are required. Just put on some comfortable clothes and practice on your yoga mat or the carpet.

While some people would rather follow along with one of the many available bedtime yoga routines available on the Web, a lot of other yogis like to practice in a group. If you are part of the second group, please join us!