War Metaphors in the Bhagavad Gita 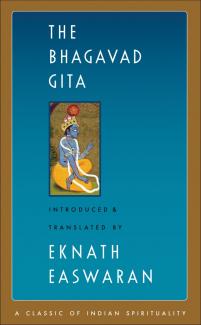 In the course of my yoga teacher training we discussed many of the influential yoga texts such as Patañjali's Yoga Sūtras, the Upanishads, and the Bhagavad Gita. However, our class understandably relied almost entirely on "secondary sources" such as Nicolai Bachman's The Path of the Yoga Sutras and Deborah Adele's The Yamas & Niyamas: Exploring Yoga's Ethical Practice. While reading about complex texts can be helpful, there can also be great benefit in reading the "primary sources" (if not in the original language, then in translation) and I have made a point to start reading English translations of these texts. I recently finished Eknath Easwaran's translation of The Bhagavad Gita, but it required a lot of commentary for me to begin to appreciate the messages, many of which are connected to war metaphors.

On the surface, some of the "facts" about the Gita make the text seem mismatched for people who follow the yogic path. The story takes place on a battlefield and concerns family members apparently ready to kill each other. One of the main characters, Arjuna, a member of the warrior class (kṣatriya varṇa), seems ready to give up and let his relatives kill him:

"Better for me if the sons of Dhritarashtra, weapons in hand, were to attack me in battle and kill me unarmed and unresisting." (1:46)

The other main character, Krishna, seems to argue that fighting and killing are the duty (dharma) of the warrior class and are justified under certain circumstances:

"Considering your dharma, you should not vacillate. For a warrior, nothing is higher than a war against evil. The warrior confronted with such a war should be pleased, Arjuna, for it comes as an open gate to heaven. But if you do not participate in this battle against evil, you will incur sin, violating your dharma and your honor." (2:31-33)

These comments acquire a much different meaning when understood as metaphors. According to Easwaran (and many others), "the Gita's subject is the war within, the struggle for self-mastery that every human being must wage if he or she is to emerge from life victorious" (15). That is to say, we should understand the story of the Bhagavad Gita as an inner dialogue, not an outer one.

Easwaran refers frequently to Mahatma Gandhi to defend the war metaphors in the Gita. He calls the text Gandhi's "personal guidebook" (10) and later Easwaran writes,

"To those who take this dramatic setting as part of the spiritual instruction and get entangled in the question of the Gita justifying war, Gandhi had a practical answer: just base your life on the Gita sincerely and systematically and see if you find killing or even hurting others compatible with its teachings." (20)

When Easwaran mentions the place of the Gita in Ghandi's life it almost seems as if he saying, "Hey, if it's good enough for Gandhi, it ought to be good enough for you." More likely, though, Easwaran is suggesting that if we see beyond our initial discomfort with war stories we have the opportunity to use the messages in the Gita to improve our lives.

That argument is weakened when, in her introduction to Chapter 1, Diana Morrison mentions "the orthodox Hindu viewpoint," which understands the Gita as condoning "war for the warrior class: it is the dharma, the moral duty, of soldiers to fight in a good cause, though never for evil leaders" (Easwaran, 75). Which is to say not everyone understands the messages in the Gita as strictly metaphors for our internal struggles.

Certainly the Gita isn't the only "spiritual" text where we find battle metaphors. Easwaran also includes multiple references to the Buddha, who also used battle metaphors, often in reference to Māra. For instance, in the Udana (3:10), the Buddha says:

"For that monk who is emancipated,
Without attachment, there is no continuity in existence.

He has vanquished Māra, is victorious in battle,
He is such a one who has overcome all continuations in existence."

The "emancipated" monk sounds a lot like "the wise" (people) described by Krishna:

"The wise master their senses, mind, and intellect through meditation. Self-realization is their only goal. Freed from selfish desire, fear, and anger, they live in freedom always." (5:28)

We might want to instead focus, as Gandhi suggested, on whether or not war and battle metaphors are helpful. Is it helpful to think about a "fight" going on within you? Do you show more compassion for people if you feel as though you have "conquered" some aspect of your inner Self? Are you "at war" with your thoughts? Are you winning? Then again, it seems likely that phrasing questions about the Gita in this way misses the point.

After my first in-depth reading of the Bhagavad Gita I am convinced it has a lot to offer. In addition to my continued study of Sanskrit, which might someday allow me to read the Gita in Sanskrit, I plan to read some of the other English translations to help develop a deeper understanding of this text and what it has to offer. I feel like my study of the Gita has only begun.