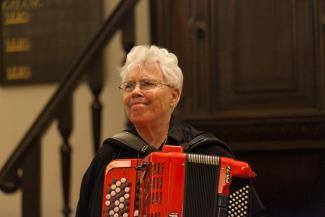 Tomorrow at 10:30am Central I will be giving a presentation (online) and leading a discussion about "deep listening," a practice developed by the composer, electronic musician, accordion player, and improviser Pauline Oliveros (1932-2016). While some teachers are certified to facilitate "Deep Listening Workshops," I will instead provide some background about Pauline Oliveros and her Sonic Meditations, an overview of the practice of deep listening, and offer some interpretations of her work/music/practices.

The practice of deep listening grew out of Oliveros's Sonic Meditations, published in 1971. In the early 1970s Oliveros worked with a group of women who later called themselves the ♀ Ensemble. The group, which met in Oliveros's home for two years, experimented with meditation, journaling, discussion, Kinetic Awareness, and other techniques. 25 of the exercises (instructions) they used eventually became the text scores for Sonic Meditations, her most widely "performed" musical work. Some of the more memorable titles from this collection include "Teach Yourself to Fly" (I), "Telepathic Improvisation" (III), and "Removing the Demon or Getting Your Rocks Off" (VII). Sonic Meditation V, "Native," tends to attract attention because this is the entirety of the instruction Oliveros provides:

"Take a walk at night. Walk so silently that the bottoms of your feet become ears."

Clearly, the Sonic Meditations are a significant departure from what most people would consider "conventional" musical works or practices.

"For me Deep Listening is a life long practice. The more I listen the more I learn to listen. Deep Listening involves going below the surface of what is heard, expanding to the whole field of sound while finding focus."

In her "guide to deep listening" (2013, 1), Oliveros explained the practice more poetically:

I receive what is

My body is sound

Her approach to sound and music may at first seem purely theoretical, when in fact the practices she advocated offer practical benefits. The composer John Cage believed, "through Pauline Oliveros and Deep Listening, I finally know what harmony is ... It's about the pleasure of making music." Deep Listening can deepen our connection to our environment, revealing details we might typically overlook. In this sense, it exposes what is real and true. Deep listening has the potential to improve relationships when practiced in the company of other people. The other benefit that Oliveros frequently referenced was the potential for "healing."

Multiple scholars have situated the music and practices of Oliveros within feminist and lesbian perspectives. Martha Mockus, in her book about "Pauline Oliveros and lesbian musicality" hears "lesbian messages of creativity, community, love, and sexuality within Oliveros's specific social and conceptual milieu" (2). Heidi Von Gunden believes that because Oliveros's "music frequently erases the divisions between performers and audiences or creators and performers, her work often reflects the feminist position of equality" (410-11).

We can also hear the music of Oliveros as yoga. Oliveros scholar Kerry O’Brien called Deep Listening "a sort of musical yoga" to help explain why recordings of Oliveros's music, such as her Sonic Meditations, miss the mark:

“Recording one of the sonic meditations would be like if someone made a recording of a yoga class – the breathing, ujjayi pranayama, the grunting, etc. – and considered that representative of the experience of the people doing the yoga”

The comparison to yoga reveals how Oliveros's practices connect to other practices, especially nāda yoga. The object of meditation in nāda yoga is the internal "sound stream" (Hersey, 18). Nāda yoga incorporates sounds, vibrations, and resonances to investigate the inner self and the outer world, working toward a union of the individual with the cosmic consciousness. Oliveros expresses similar ideas to describe her Sonic Meditations: "Sound, both inner and outer, real and imaginary, is the stimulus of Sonic Meditations" (1984, 141). Some Theravada Buddhist monks, such as Ajahn Sumedho and his student, Ajahn Amaro, frequently discuss how to use the inner (nāda) sound as a meditation object.

The practice of Deep Listening advocated by Pauline Oliveros is remarkable both for its simplicity and its depth. It's an embodied practice in which the whole body listens. The practice allows people to let go of fantasies of progress and exist in the present moment. If you would like to learn more about deep listening and join in our discussion, all are welcome to join me tomorrow.