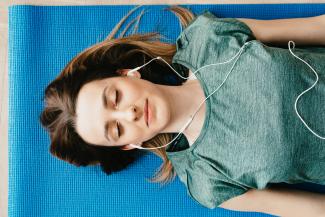 I learned a new word today: "moga." No, I'm not talking about the Sanskrit word for chicken pox, moga, or the video game controller series. I'm referring to the equation Classical Music + Yoga = Moga. If you "combine yoga with a live orchestra" then apparently you can answer affirmatively to the question, "Do you moga?" It's the "latest wellbeing trend to arrive in London," circa 2015. "Moga" has even been featured on the "Trend Hunter" website.

The idea of "moga," according to "several new-age yoga gurus," is similar to "voga," which "combines the traditional asanas with dance." These new variants of yoga are intended to be less "boring" than the "original form of yoga." According to Wikipedia, "Voga" was created by Juliet Murrell, founder of House of Voga, and is not just any dance: voga is a cross between yoga and voguing. What is more, yoga's Madonna-inspired makeover, according to the Voga London website, "is one of the hippest yoga classes in London right now."

Naturally, London is not the only place where people have thought to combine live classical music with yoga. Similar events have occurred in the United States in places such as Santa Barbara, California and Summit County, Colorado. And a classical music radio station in New York "creates special playlists for yoga studios." There are probably many other examples of "moga" that I don't know about.

I'm not exactly what to make sure of this word. It seems like "moga" might be connected somewhat to the idea of "harmonialism," a term used by Sidney Ahlstrom to describe bodies acting in harmony with the cosmos. More recently, Anya Foxen (following Mark Singleton, and Ahlstrom), used "harmonialism" to refer to "the active impulse to harmonize and to be in harmony" (22). I suppose by combining music and yoga to create "moga" might be understood as adding another level of harmony to our practice. But I don't have much more to say about this word since I just learned about it today.