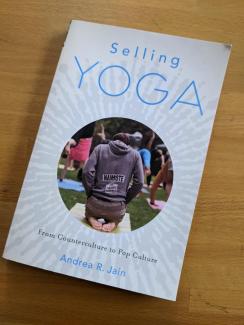 The first meeting of the Spirit of the Lake Community Discussions & Book Club last night was a resounding success! After a brief centering exercise and introductions, we had a lively, thought-provoking discussion about a Yogaland podcast episode that featured an interview with religious studies professor Andrea Jain about her book, Selling Yoga: From Counterculture to Pop Culture.

Many of us in the group were struck by the words Jain uses to describe yoga. In the podcast and in her book (the source of the quotes below), Jain makes claims such as, "an authentic form of yoga does not exist" (132). Some people in our group found themselves questioning long-held ideas about "real yoga" or "ancient traditions." Jain repeatedly, and convincingly, undermines basic assumptions about yoga, challenging many essentialist definitions. In her study of many well-known forms of modern postural yoga — such as Hatha, Iyengar, Siddha, Bikram, vipassana, raja, Anusara, and many others — Jain concludes that "modern yoga is malleable" (41).

Jain argues that yoga is contextual and that many conceptions of modern yoga are either oversimplified, or worse, incorrect. For instance, while many of us in the group understood that yoga is "more than asanas," we were rather surprised to learn that "posture practice was not central to any yoga tradition prior to the twentieth century" (37). Additionally, she challenges conceptions of yoga that "write off postural yoga as nothing more than mere commodification" (100). If we had thought that "ancient yoga" was somehow more wholesome than what we find in yoga studios today, Jain shows that "many premodern yoga systems are not ethical in any modern sense of the term" (120). Or if we had suspected that yoga has a Hindu origin, Jain demonstrates why this position "cannot stand serious historical scrutiny" (131).

Jain's views might sound radical to the casual student of modern yoga, but in fact her research builds on other well-known and well-respected scholars of modern yoga, such as Elizabeth De Michelis, Mark Singleton, and David Gordon White. For instance, White similarly concluded, "Every group in every age has created its own version and vision of yoga" (2).

The choice of Jain's research as a topic for the first meeting of our Community Discussions & Book Club was strategic. Of course I cannot speak for everyone in our group, but there were at least a few of us — especially the yoga teachers in the group — who felt a certain sense of relief to learn that we could explore yoga without concerns about being correct or right. I am not suggesting that any interpretation of yoga is valid, but instead that we can move forward in our discussion group reading and talking about yoga, feeling confident that we can incorporate helpful ideas or approaches in our own yoga practice.

If you would like to join us, exploring a broad variety of ideas about yoga, next week we will begin our discussion of Tias Little's The Practice Is the Path: Lessons and Reflections on the Transformative Power of Yoga. You can find out more and sign up on the Spirit of the Lake website. Everyone (who is willing to abide by our Code of Conduct) is welcome!

Excellent summary & thanks for leading an insightful conversation Matthew!

I was certain I would find the experience of this discussion group thought provoking & inspiring. What really stirred me was the sense of community & belonging that Matthew so expertly facilitated & which the members of the group, including Matthew, elicited in me. I look forward to delving further & am blessed to be in such great company.

Thank you for getting this group together, Matthew! The discussion was inspiring and this summary is great. I picked up my book yesterday and I am LOVING it. Looking forward to more insightful discussion with everyone! M