TidalCycles (or just "Tidal") is a programming language used for live coding. I'll leave further details about Tidal for another post, but essentially Tidal facilitates creating music with code. While the Tidal community hopes to make installing Tidal on GNU/Linux easier, I struggled to get Tidal working on Debian stable.

This post is partly "install guide," partly "moderately-tested brain dump" of what I've learned. The information here might prove helpful for someone struggling to get Tidal working on Debian stretch -- potentially me if I break something. While some of what I'm including here comes from the Tidal install guide, I contradict the instructions on a few key points. Once I got everything working on one laptop, I repeated the steps below on another laptop -- both running Debian stretch. I apologize for any errors.

More importantly, I welcome feedback! I'd like to either contribute back to the Tidal documentation, create an install script that works for Debian (similar to linux-install.sh in the Tidal repo), or figure out some way to package (or help package) Tidal for Debian.

But in the meantime, I suggest installing Tidal like this:

The install guide does not mention the JACK Audio Connection Kit, but I found JACK necessary to get Tidal working on Debian. JACK, PulseAudio, and ALSA can function in a wide variety of configurations, but I prefer running JACK alongside PulseAudio (which I learned to do, in part, from some old Fedora docs).

These instructions work for me, but occasionally I still have to manually kill PulseAudio (pulseaudio -k) when JACK is running. Also, in some scenarios when JACK is running, I can only control the volume in my headphones using alsamixer, which feels clunky.

If you don't already have git installed, install it with:

Tidal's installation directions for GNU/Linux say that Haskell Stack is a requirement and suggest to use the haskell-stack included with your distribution. However, I have Tidal working without Haskell Stack. The haskell-stack package from stretch does not include support for upgrading with stack upgrade --binary. Further, running stack upgrade or stack install tidal (the suggested method to install Tidal) both result in this error:

The Haskell Stack documentation regarding Debian suggests running their install script (curl -sSL https://get.haskellstack.org/ | sh), and I can confirm that it works. But we use Debian stable, so we don't like to install software that way.

The solution to this problem that I prefer is to use Cabal. You can install it with this command:

Step 5: Install SuperCollider and the plugins 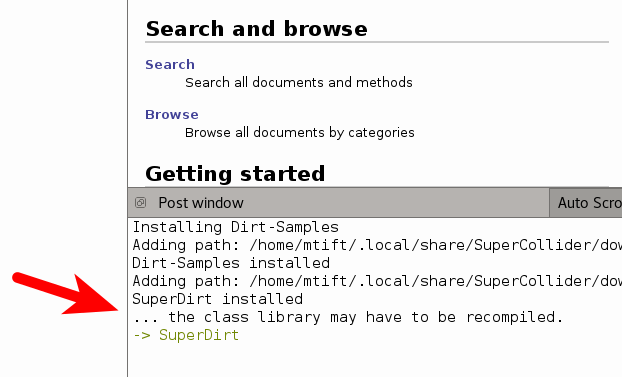 Once again I am going to contradict the install directions, which state "You need to have four pieces of software, Haskell Stack, Atom, SuperCollider and Git." Atom, like Haskell Stack, is not required, and further down the page it says, "If you prefer using another editor (rather installing Atom as described above), you can" use Sublime Text, Emacs, or Vim. It seems that a lot of people using Tidal run it in Atom, and that works well. If you'd rather run Tidal in another text editor, skip to the next step. If you would like to install Atom, follow these directions.

If you did not install Atom, then this step is a requirement. Follow the directions for your preferred text editor. I did not test all of the options, but I can confirm that the vim plugin works great and that it is highly configurable.

Now that you have everything installed, here are the steps for using Tidal.

In case of trouble

I hope you enjoy Tidal!